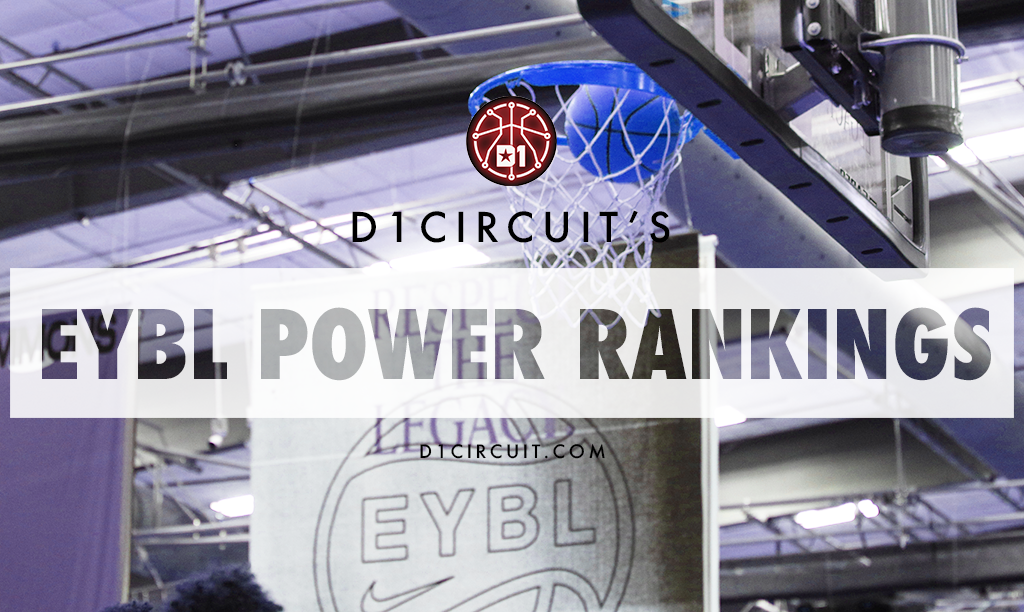 Team Takeover distanced themselves from the pack in Atlanta, continuing their perfect 2018 campaign behind the most balanced rotation in the country. Justin Moore led the way, averaging 17.6 points, 3.7 rebounds and 2.0 assists, while Terrence Williams, Armando Bacot, Hunter Dickinson and Anthony Harris all have standout individual performances. How good is Takeover? Their top seven players rested the final game in Atlanta, and Takeover will beat Rose City by 26. Jahmir Young dropped 30 points, nine assists and three rebounds in the win, assisted by Yale commit EJ Jarvis (15 PTS, 3 REB, 2 STL) and Josh Oduru (12 PTS, 9 REB, 2 AST). Takeover allows a league-low 58.5 points per game, and have held five of their 12 opponents to 50 points or fewer. Simply put, very few teams have a chance at competing with Takeover for 32 minutes, much less beating them. 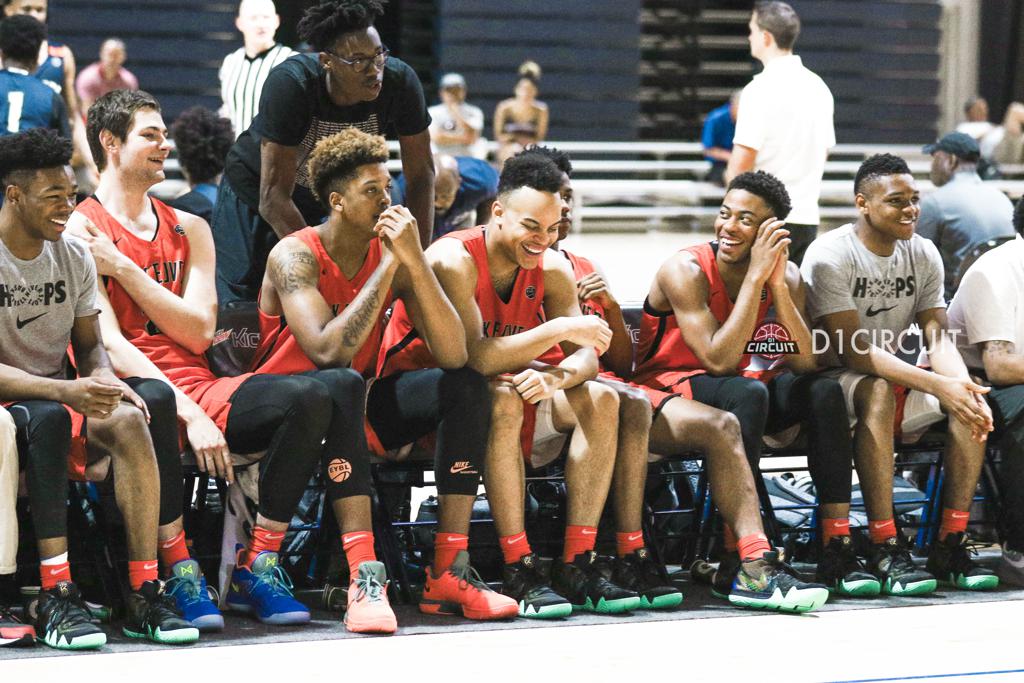 Winners of 10 of their last 11 games, AOT turned into the clear No. 2 in Atlanta after a 4-0 performance. The four wins came by an average of 12.5 points per game, including a double-digit comeback win in the session opener over Team WhyNot. Sharife Cooper (19.1 PPG, 4.8 RPG, 6.4 APG) and Isaac Okoro (17.0 PPG, 7.7 RPG, 4.2 APG) have been stellar all season for AOT, and both have an outside chance at league MVP with a strong fourth session. Junior big man Babatunde Akingbola stepped up huge in Atlanta, earning Defensive Player of the Session after averaging 5.3 blocks and 10.0 rebounds and 2.3 steals per game. Throw in sophomore Brandon Boston and top 25 junior Christian Brown, and you're looking at one of the deepest and most talented teams in the country. 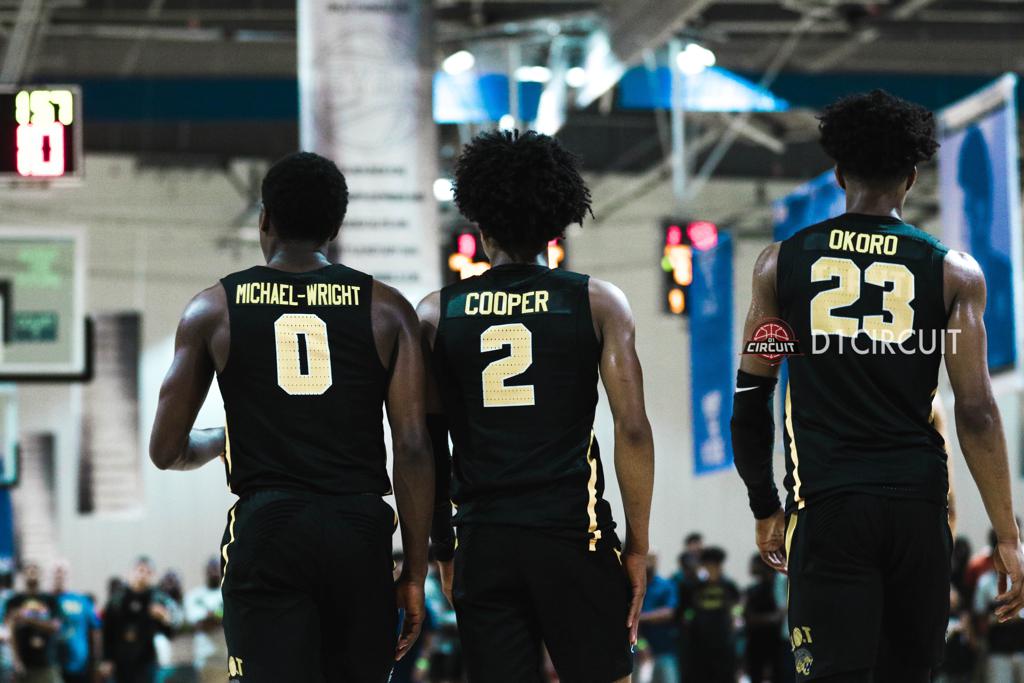 The Hoops' season took off when Tyrese Maxey re-joined the squad during session two, and they continued their string of impressive performances in Atlanta. The guard-heavy Hoops squad is led by starting trio Maxey, De'Vion Harmon and Chris Harris who combine to average 50.6 points per game. They have five wins over projected Peach Jam competition, and are one of two teams to topple No. 2 Athletes of Tomorrow. Head coach Tim Schumacher loves the makeup of his current squad, and be much more refined by July. They have a favorable schedule in session four, and will likely enter Peach Jam as one of the top contenders. 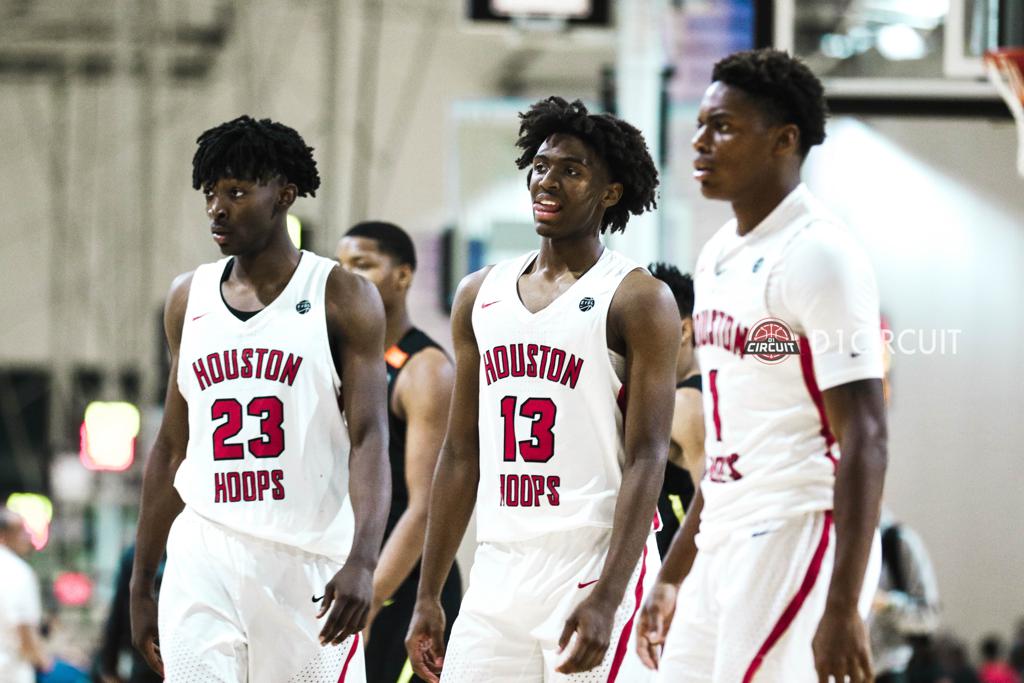 CP3 suffered a massive slip-up against Howard Pulley, the only flaw on a 3-1 session which included wins over the Georgia Stars, The Family Detroit and Team WhyNot. Wendell Moore continued his consistent production in Atlanta, averaging 18.0 points, 6.3 rebounds, 4.0 assists and 2.0 steals in four games. Dericko Williams suffered a finger injury and Nick Brown was absent from the rotation, so CP3 continued their winning ways with only seven players.They'll use the next two weeks to get healthy, and if they can get improved production from Dude Collum and the Langley twins, CP3 will be a top five team entering Peach Jam. 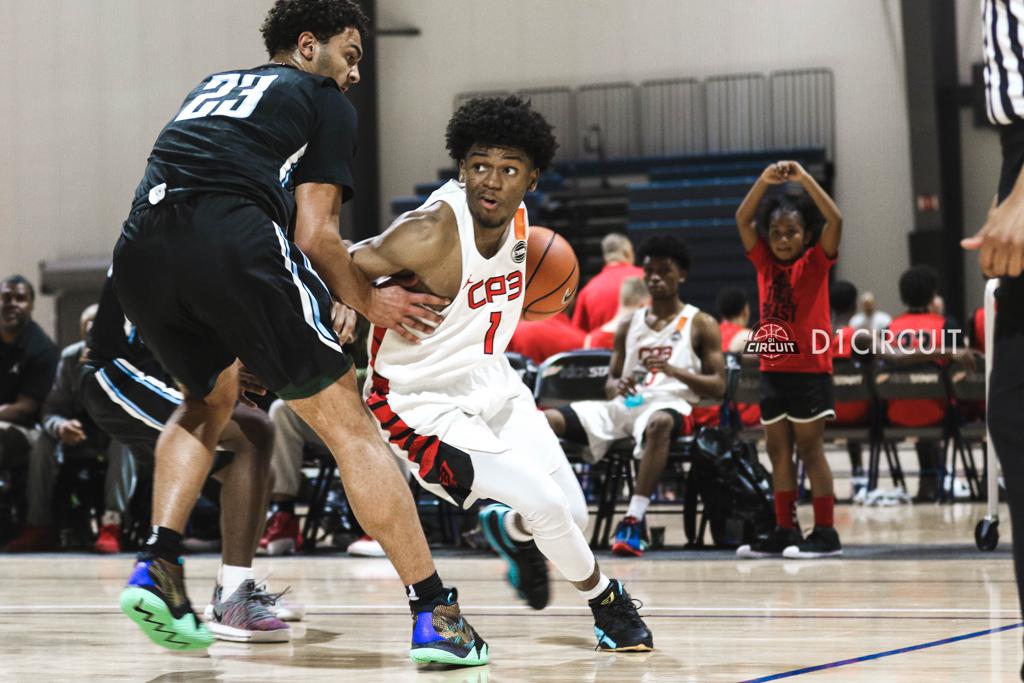 Drive Nation showed glimpses of greatness during their first two sessions, and it all came together for them in Atlanta. Drive rattled off four wins, scoring 90+ on two separate occasions while beating Howard Pulley on a crazy final sequence. The Jermaine O'Neal-led squad features seven players averaging between 6.2 and 14.1 points, resulting in some of the best depth on the circuit. Samuell Williamson took his game to another level in Atlanta, landing Second Team All-Session honors after averaging 19.5 points 4.0 rebounds and 1.5 assists in Drive's four wins. 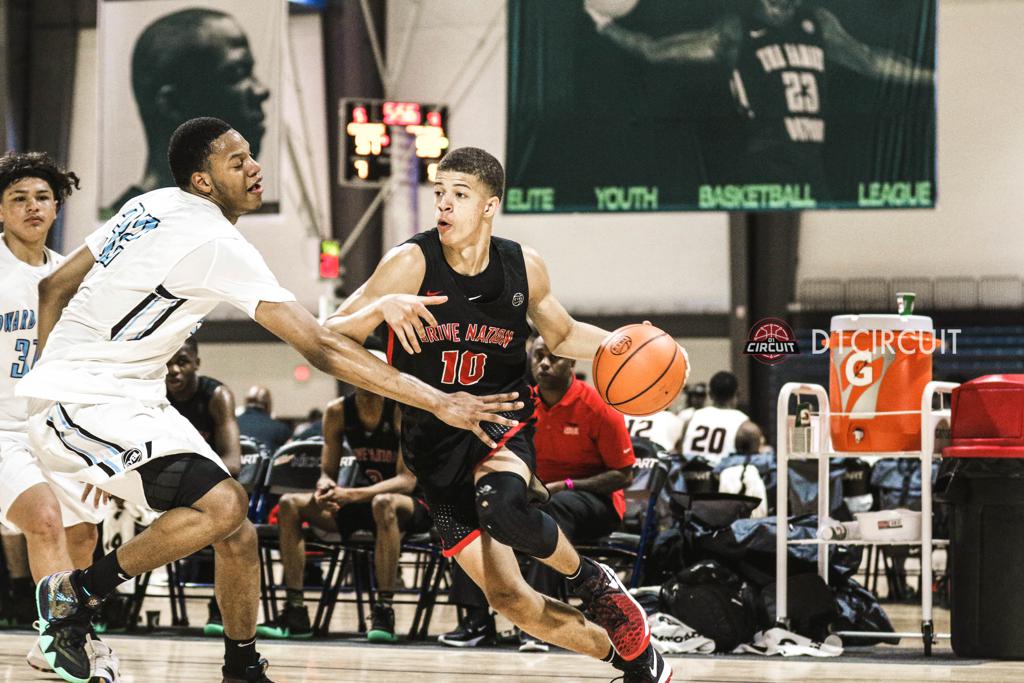 The City Rocks make the biggest jump off the week, fresh off undefeated Atlanta session (4-0). Isaiah Stewart absolutely dominated the third session, turning in averages of  20.3 points, 65.4 FG%, 11.5 rebounds and 2.8 blocks en route to the session Most Valuable Player honor. The Rocks are deep and talented, and if they get production like they did from Stewart and Joe Girard in Hampton next weekend, they will be cruising into Peach Jam with a whole lot of momentum. Mika Adams-Woods stepped up big time in Atlanta, and if head coach Jim Hart can get him to become a reliable third scorer, the Rocks should be in great shape come July. 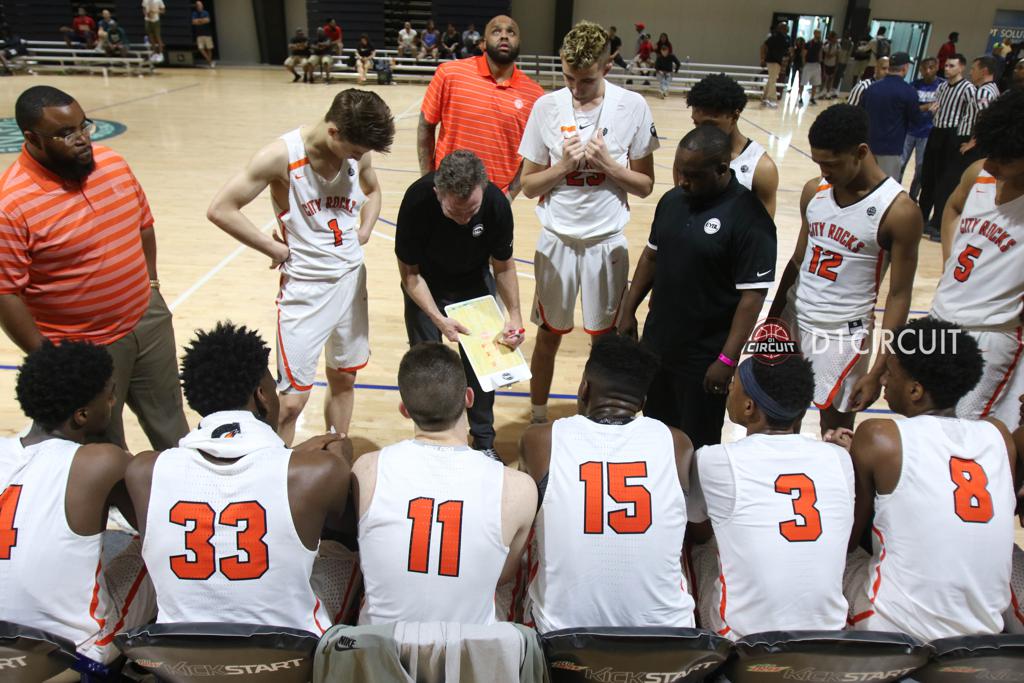 Brad Beal Elite split their four games in Atlanta, losing a heartbreaker to rival MOKAN Elite. They rebounded with a big overtime win against fellow rival Bluff City Legends. EJ Liddell put together his best session of the season (17.3 PPG, 7.3 RPG, 2.5 SPG), while recent Oregon-commit Francis Okoro continued his rock-solid play (15.3 PPG, 10.3 RPG). Zion Harmon, Yuri Collins and Mario McKinney are coming together as a backcourt unit, and BBE will become a completely different team if they start firing on all cylinders. They have an easier schedule in session four, and should be able to build some momentum as they head into July. 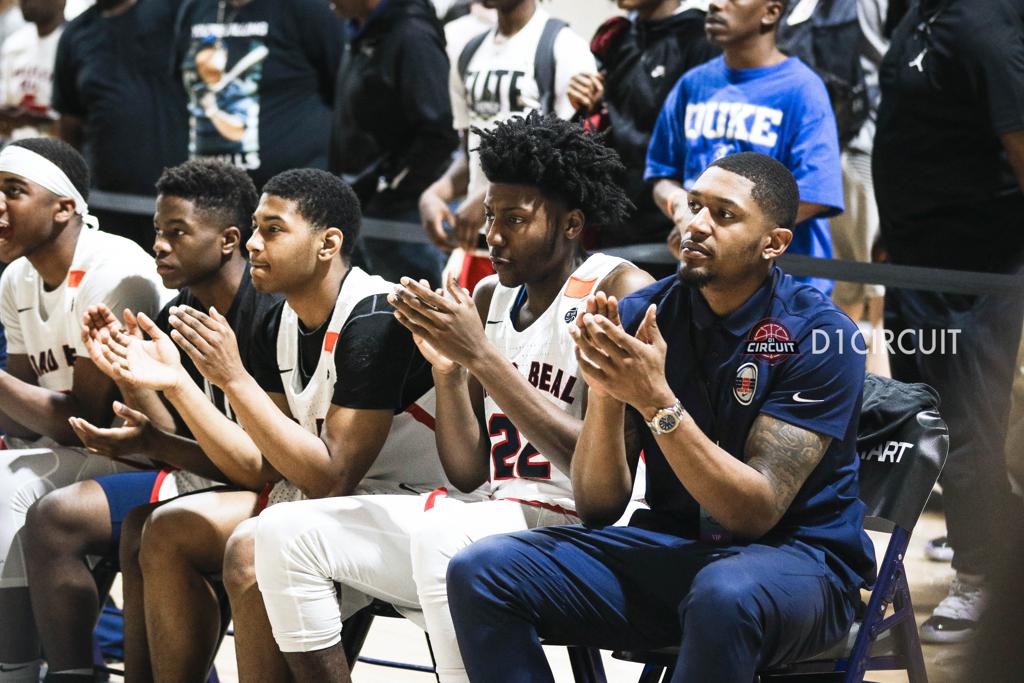 Woods Elite rattled off three wins in Atlanta, despite being without star big man Jason Jitoboh (ankle). Woodz uses 12 players in their rotation, proving they are one of the most balanced and deep teams on the circuit. Mylik Wilson, Austin Crowley and Collin Moore have stepped up as the leaders in the backcourt, while point guard Tylor Perry played his best session in Atlanta. They should be getting Jitoboh back before the end of June, which will turn Woodz into a very formidable Peach Jam opponent. Their schedule is favorable in Hampton, and they should be a top ten program come July. 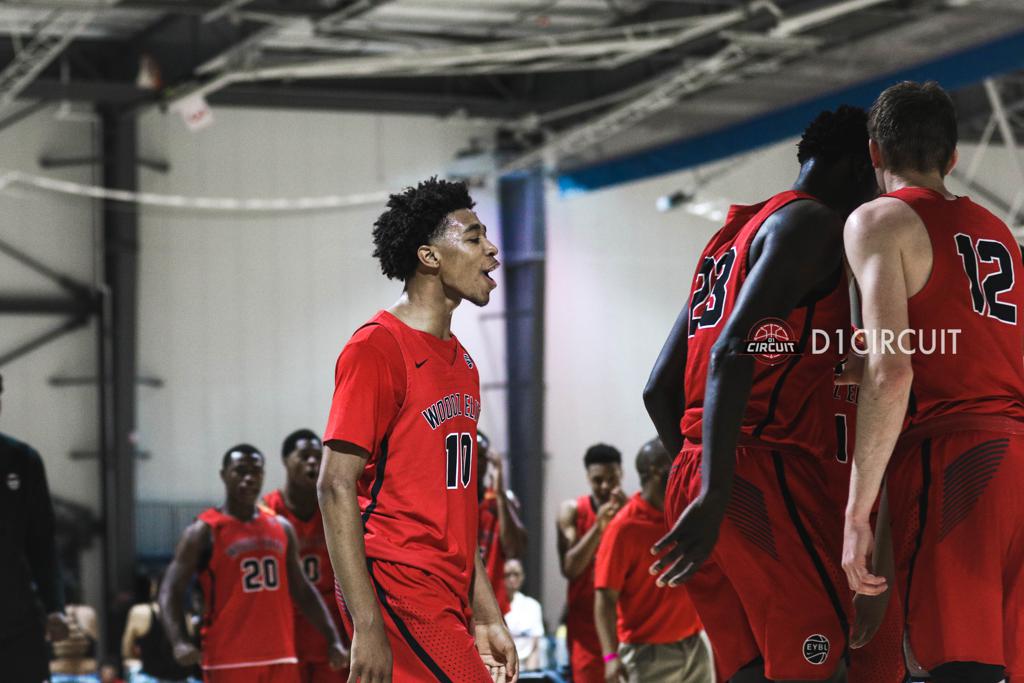 The Indy Heat dropped their final two games of EYBL Atlanta, dropping the finale in overtime against the Oakland Soldiers. Keion Brooks (Second Team) and Trayce Jackson-Davis (Third Team) were both standouts, with the former entering the fourth session as a certified regular season MVP candidate. The backcourt hasn't been as productive as head coach Jason Delaney would have wished, and they'll need one of Ethan Brittain-Watts, Drew Lowder of Harold Bennett to step up alongside Jalen Windham. Still, with Brooks and Jackson-Davis leading the way, this is a July contender. 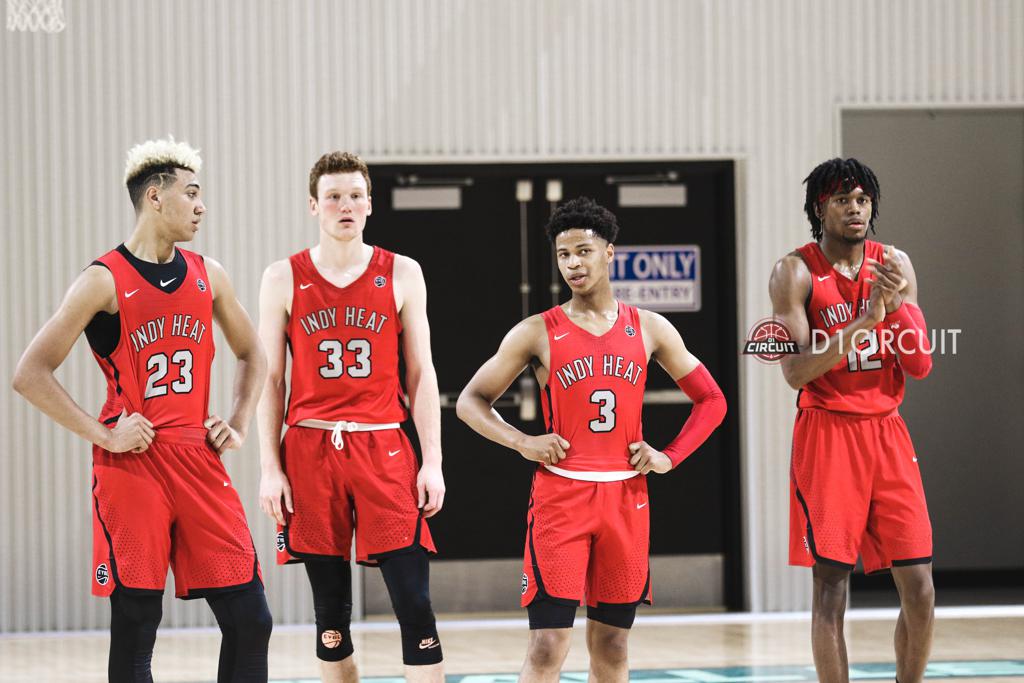 MOKAN rebounded after a rough session two, tallying three wins, one of them against rival Brad Beal Elite. They escaped with a one point win over BABC in the Atlanta finale, proving their ability to win close games behind Malik Hall and N'Faly Dante. They square off against Houston Hoops and the City Rocks during session four, so we will get a chance to see how much MOKAN has developed since session one. MOKAN is always a threat in July, and they have a chance to build up some solid momentum in late May. 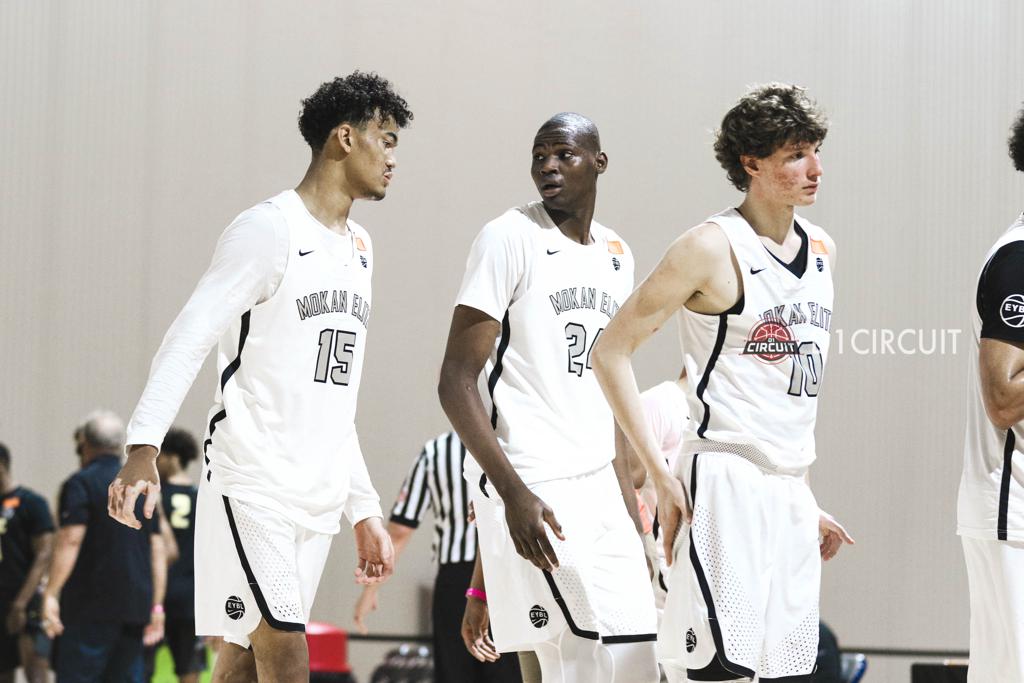 A lack of signature wins has kept Rotary off the rankings until this point, but their success in Atlanta was impossible to ignore. They finished the session with a huge win over the PSA Cardinals, putting them in a terrific position to earn their first ever trip to Peach Jam. They have a certified star in big man Jaden McDaniels, and him being on top of his game will be a necessity as Rotary faces off against Bluff City and Woodz Elite in Hampton. Buy stock in Rotary now, because they have all the pieces to make a nice run in July. 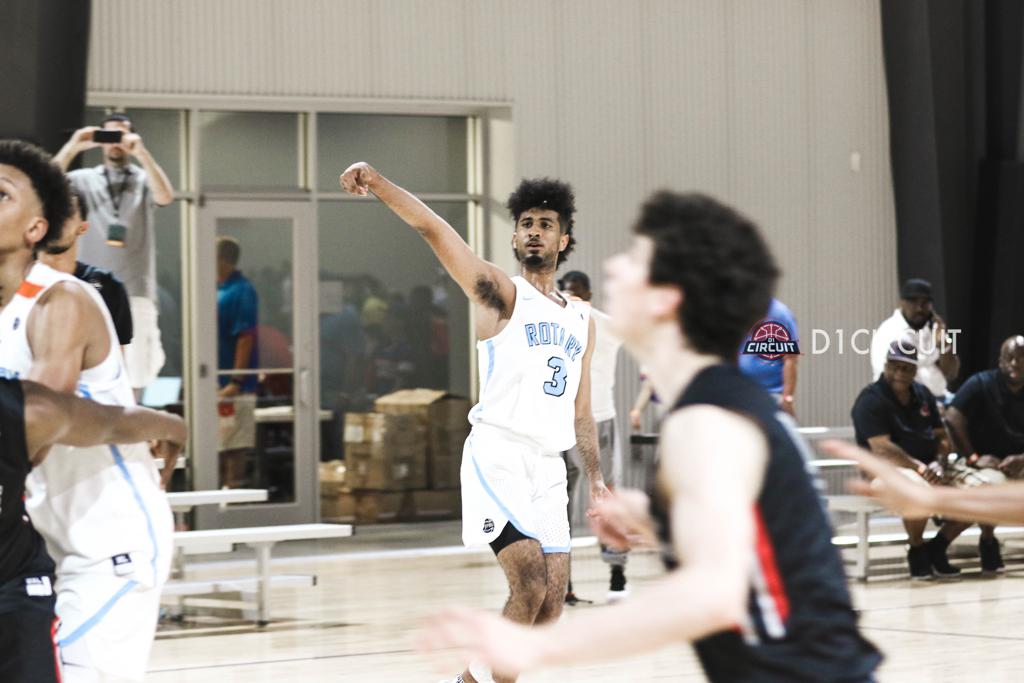 The Soldiers lost a heartbreaker to open the session, falling to a Vernon Carey layup as time expired. Boogie Ellis' 43-point performance in a win over the Phamily made that a distant memory, an effort that won him Co-Performance of the session honors. Thanks to an Ellis' triple at the end of regulation, the Soldiers rallied to take out the Indy Heat in overtime, securing a win in their final game in Atlanta. Session Four will be no easy task, as Ellis, Scotty Pippen, KJ Martin face off against AOT (No. 2) and Houston Hoops (No. 3). 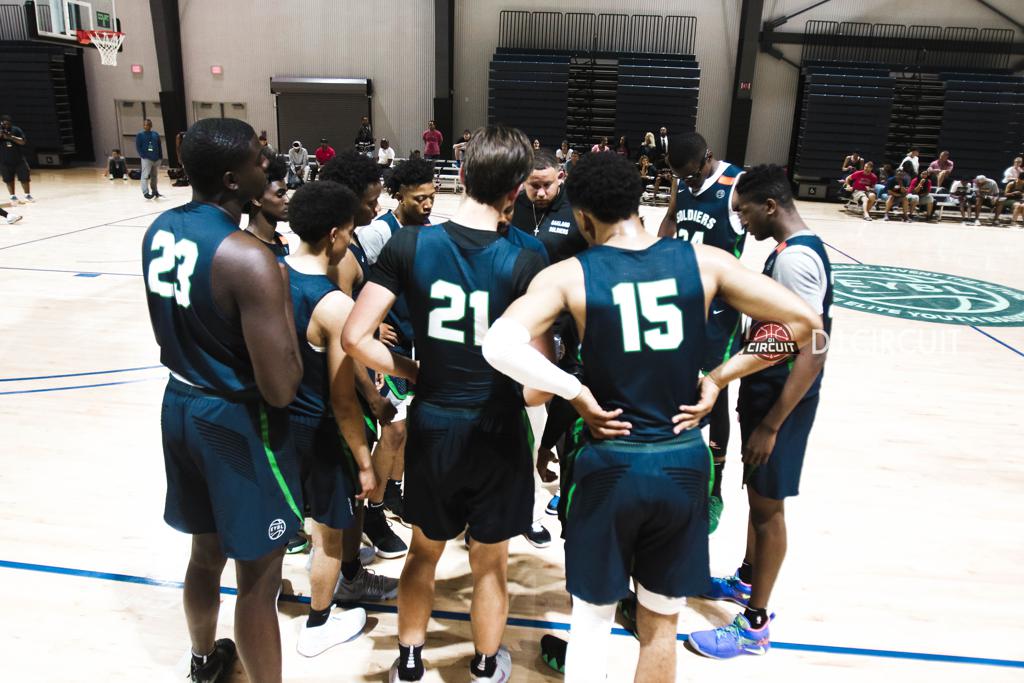 The Lighting went 2-2 in Atlanta, rallying to beat UPLAY in their session finale after a 16-point comeback. Deshawn Davis and Posh Alexander continued their strong play, and their production was matched by junior veteran Jordan Dingle. Head coach Shandue McNeill has his team playing as hard as anyone on the circuit, and they'll need every bit of that intensity as they look to take out No. 1 Team Takeover next weekend. The Lightning likely need one win to seal their Peach Jam bid, and have a chance to massively grow their resume if they topple Takeover. 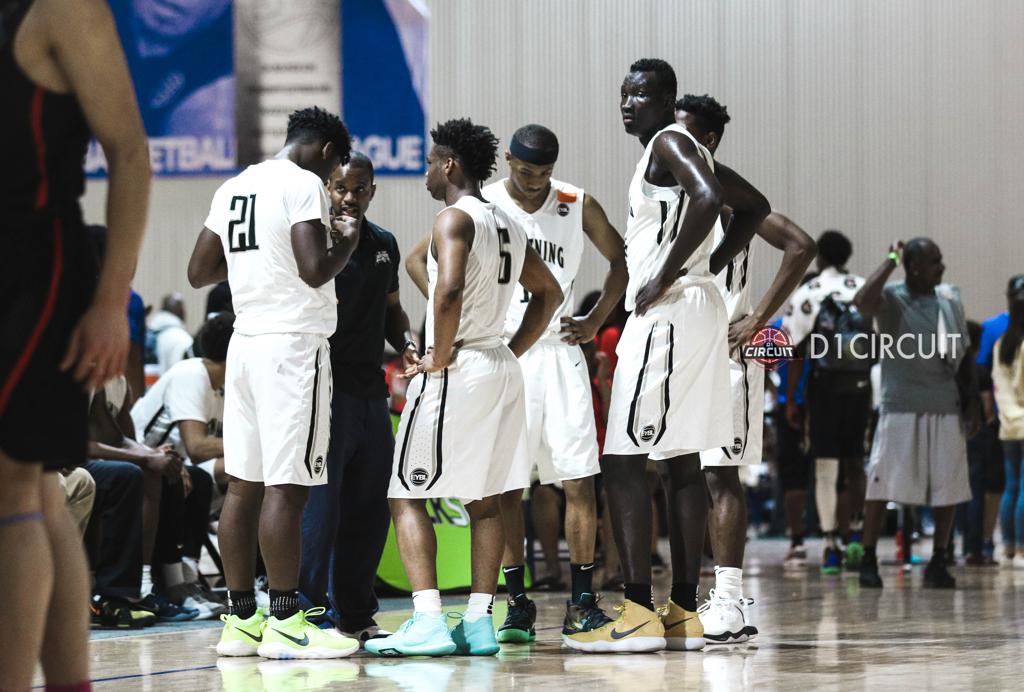 Expressions looked terrific in their session-closing win, taking home a narrow two-point win over Brad Beal Elite. Noah Fernandes and Daniel Buie led the way in that win, but their three Atlanta wins were a team effort under head coach Todd Quarles. Sophomore Dyondre Dominguez stepped up, while Tre Mitchell and Joe Pridgen continued their solid play. This unit has been underrated by us all season, and like the Lightning, not many teams play harder for their coach. We are hoping Takeover doesn't rest their starters in the finale, as we'd love to see how Expressions would match up against the league's best rotation. Expect Expressions to maintain their consistent play in Hampton. 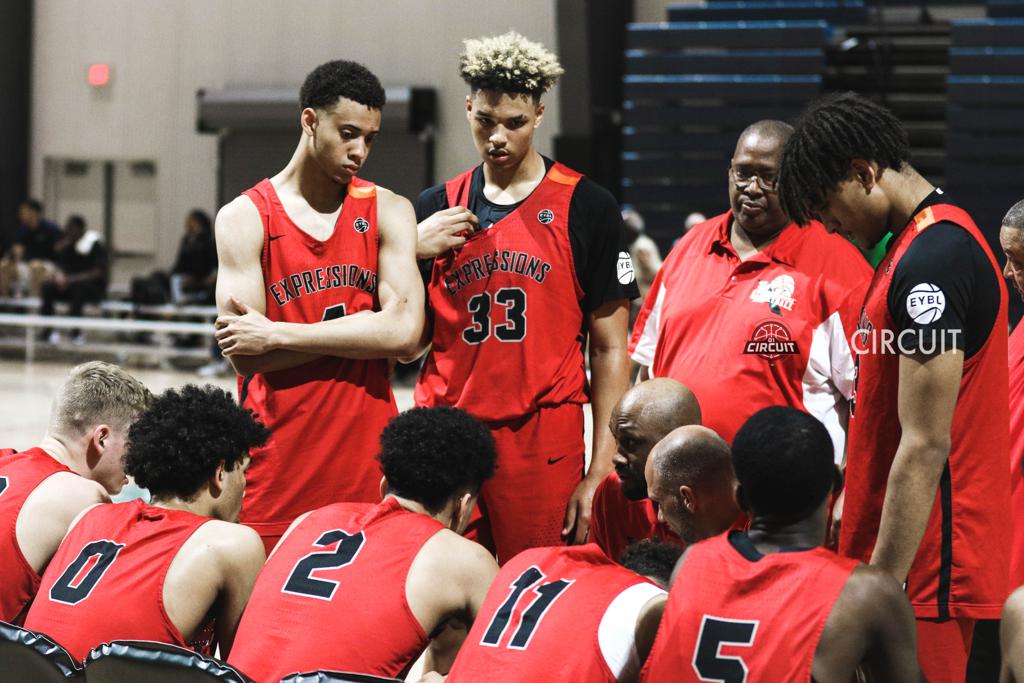 Pro Skills sneaks in as the only 5-3 team in the rankings, mainly due to their wins over the other ranked Texas programs. Their rotation has been built with precision, and roles have been carved out through 12 games. They have a chance to pick up a couple signature wins in Hampton, facing off against E1T1, Team CP3 and Team WhyNot. They don't have the star power of other teams, but top to bottom, there's a lot to like about the rotation. Throw in Atlanta newcomer Micah Peavy and a fully-healthy Jordyn Adams, and it becomes likely we'll see the best version of Pro Skills during session four. 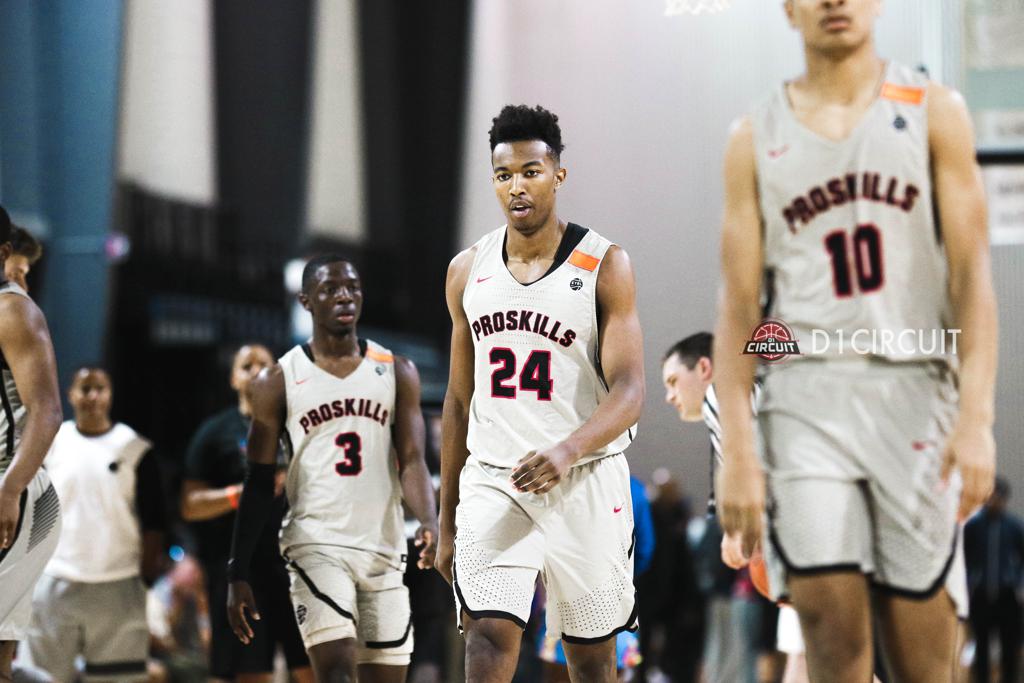