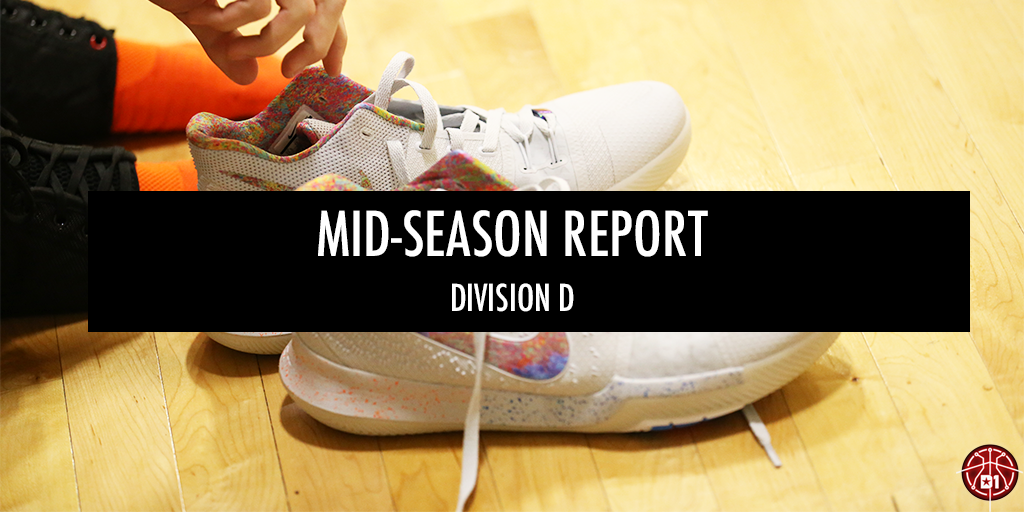 The defending champs have picked up right where they left off, sporting an unblemished record through the first half of the season and showing no signs of slowing down. Indianapolis Most Valuable Player Jontay Porter is averaging a double-double, and is surrounded by talented supporting cast. Cooper Kaifes, Israel Barnes and Malik Hall have settled nicely into their roles, while head coach Chris Neff has shown the ability to guide his team successfully in close games. Running the table is nearly impossible in the EYBL, but we wouldn't put it past MOKAN.

Cole Swider (20.6 PPG) was always going to be ready to become this team’s leader as he has had plenty of EYBL experience already, but it’s the play of Jakigh Dottin (17.8 PPG, 5.2 APG) that should scare opponents the most. Dottin has done it all through his team’s first eight games, which opens the door for others to get their time to shine.

One of the EYBL’s premier programs, Team Penny always finds a way to replenish their talent pool and assign new roles to veterans and fresh blood alike. This year’s squad looks just as balanced as ever, with forward DJ Jeffries and point guard Alex Lomax leading a deep rotation. If Penny can find an additional scoring threat they could give MOKAN and BABC a run for their money in Division D, while once again contending for a Peach Jam crown.

Losing four Top 100 prospects from a team that advanced to the final eight last season, Expressions has managed to bounce back nicely and have padded their resume with some impressive wins already. Sophomore Dana Tate (14.4 PPG) and junior Marcus Zegarowski (13.9 PPG) lead a rotation with nice length and shooting prowess. They make a strong argument for most underrated squad on the circuit, and will look to add to their growing resumé in Atlanta.

Formerly dubbed the St. Louis Eagles, Bradley Beal Elite has impressed so far with some big wins and an uncanny ability to hang around even when they’re not at their best. Top-ranked junior point guard Darius Garland (17.5 PPG, 5.5 APG) has found himself a great sidekick in sophomore bruiser James Wiseman (11.6 PPG, 8.0 RPG). This team plays unselfishly and locks down on defense, two traits that should help them compete for a Division D crown in Atlanta and Los Angeles.

Work Left to Do:

Junior forward Jalen Smith (11.6 PPG) has done his best to take over for the departed Chris Lykes and DJ Harvey, while Brandon Slater (ESPN 4-Star) came on in Indianapolis. One would be foolish to overlook head coach Keith Stevens crew, who guides a program that has never missed Peach Jam. They have a very talented rotation that we expect to rebound in a big way during session three.

Team Hood has done a great job all season scoring the ball, but they haven’t defended well enough to have their record reflect those efforts. Combo forward Robert Woodard (13.6 PPG, 10.2 RPG) is an absolute beast and an underrated player on the circuit, and point guard Jared Butler (15.1 PPG) has shown the ability to score in bunches. MEBO has had the best success of any EYBL newcomer, and enter Atlanta as the dark horse from the division.

The Stars don't have their usual depth in the front court and that has been sorely missed this year. They have been right in the thick of every game they have played so far though, so they could still finish with a respectable mark. If Peach Jam is going to be in the cards for the Stars, they will need a strong session on their home turf of Lakepoint Sports Complex.

Although the sport a 1-7 overall mark, the Stampede do have some bright spots to be proud of. For the second straight year, the breakout player of the spring is on the Stampede roster; last season it was Collin Sexton and this year its lead guard Jalen Lecque (18 PPG), who tore it up in Hampton and is looking to make his a household name come August. They've lost a handful of close games already, and will be looking to put on for their home crowd of Atlanta.

After sitting out 2016, Team United is struggling to re-adjust to the tough competition in the league. At this point, even stringing a few wins together against competitive squads would go a long way in the future of the program as it pertains to the EYBL. They aren't technically eliminated, a fact that will surely motivate talented guards Trey McGowens, Qon Murphy and Patrick Williams.