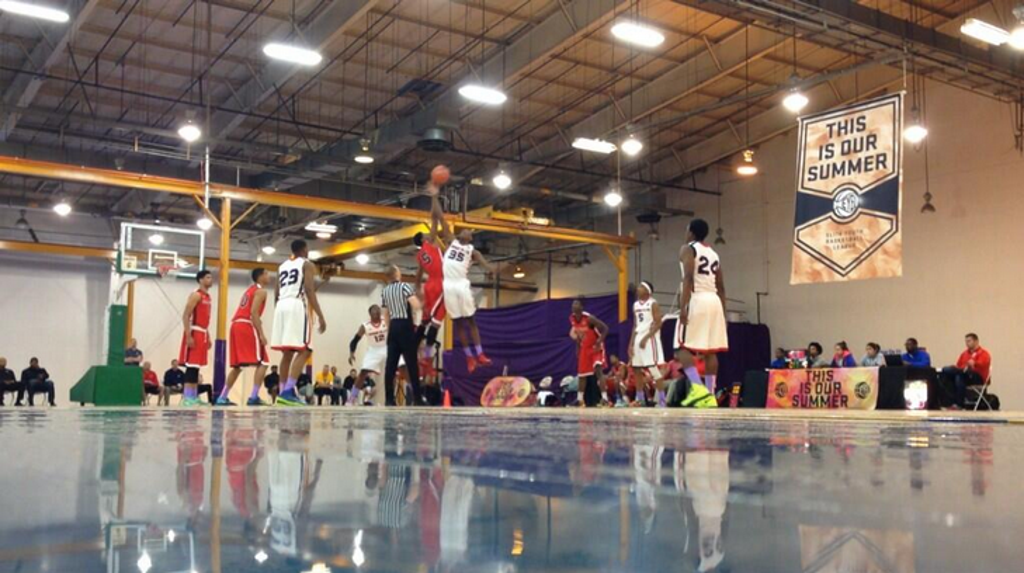 Allonzo Trier is an EYBL-veteran, and he proved that thusly in Sacramento. Trier blew out of the gates early with a 35-point game in a convincing win over Xpress. What really proved his veteran leadership, consistency and scoring ability were the 29, 23 and 27 point games in the next three for Athletes First. Trier had a very good chance at being this year's overall scoring leader, and by scoring 114 in the first session, he's starting off on a good foot in that regards while also leading his team to a 4-0 session record.

How can you not choose Malik Monk's 59-point explosion on Sunday morning? Monk took it to All Ohio Red from everywhere, shooting 15-26 from the field, 10-16 from three-point territory and then an astounding 19-23 free throws. Even in the EYBL, where the only the elite of high school basketball come to play, a game like this is just flat-out ridiculous. In fact, Monk's big morning set the EYBL single game scoring record. How's that for Best Performance?

Simply put, Brunson has the most complete floor-game of any player in the Nike EYBL, and he showed why this weekend. While he only played three games, the 6-foot-3 combo guard averaged 16.3 points, 9.3 assists, 4.3 rebounds and 3.7 assists per game, leading Mac Irvin to a 2-1 record in the opening session. At this point of his career, an open three-pointer is as good as a layup for Brunson, but he has the ability to beat you in numerous fashions. His teammates must love running the floor with him, as his 9.3 assists per game is 3.5 than the next highest player (Braxton Beverly). We already knew Brunson was a stud, but he took his game to the next level this weekend. No doubt he will be a contender for this accolade after each session.

The 6-foot point guard from Fairfax, Virginia had an eye-opening first session for the DC-based Team Takeover. In three games, Dorsey averaged 20.7 points, 3.7 rebounds, 3.3 assists & 3.3 steals per game. Just like Brunson, Dorsey was able to showcase his overall floor game, especially in the comeback against the Georgia Stars. Down by 24 with eight minutes left in the game, Dorsey spear-headed furious comeback for Keith Stephens' bunch, rallying for a 9-point win. Dorsey will be featured for Takeover all season, so it's nice to see him get off to such an impressive start.

The Nike team from Tampa got off to a 3-1 start in their return to the 17U EYBL, and Cheatham was a big part of their success. In four games, the 6-foot-5 combo guard averaged 17.8 points on 46% shooting, while grabbing four rebounds and two steals per game. Down 17 to MOKAN Elite in the second half, it was Cheatham who decided he wasn't going to let his team lose. Stepping to the line with confidence each and every time, Cheatham went 17-17 in the furious comeback, showcasing incredible focus in a tight situation. He is their focal point on offense, and the highly-recruited guard showed us why in Sacramento.

Yes, we realize we will probably need to include him in this piece after every session, but the 6-foot-9 phenom from Australia was too good to ignore in the first session. In reality, it would be quicker to list the aspects of basketball that Simmons doesn't do well than the things he does. The top forward in the 2015 graduating class put up 18.7 points on a gaudy 70% shooting, grabbing seven rebounds and dishing out three assists per game. There is no one in the EYBL that will have an answer defensively for Simmons, as his game is about as complete as they come. It was a pleasure to watch him perform, and we fully expect him to compete for MVP honors in sessions to come and perhaps even overall.

This. Kid. Is. Good. The 6-foot-9, 220 pound athlete had himself a weekend, delivering four extremely impressive performances while leading Spiece to four wins. Taking full advantage of teaming up with Caleb Swanigan in the frontcout, the Michigan State-commit felt right at home in his EYBL-debut. Shooting a ridiculous 77% from the field, Davis averaged 19.5 points, 7.8 rebounds, & 1.7 blocks through four games. He generated plenty of buzz among coaches and scouts during the opening weekend, as we are sure Tom Izzo watched with a smile on his face. After a session like this, he is likely to see a dramatic rise in his placement among scout rankings.

This, ladies and gentleman, is the definition of a matchup nightmare. Every bit of the 6-foot-7, 220 pounds he is listed at, the Shaker Heights product flourished in the face of improved competition. The do-it-all Ahmad averaged 13.3 points on 50% shooting, 9.7 rebounds, 2.3 assists and 1.5 blocks per game. Matched up a very formidable Texas Titans' frontline, Ahmad went to work, putting up 20 points, 15 rebounds, 3 assists & blocks. His game is very smooth and he has very good handles for a player his size. He is a relative late-bloomer in the recruiting world, but session performances like this will likely give Ahmad the ability to choose whichever school he pleases.

The diminutive point guard had an impressive EYBL-debut for himself, becoming an instant producer in the Stampede's system. Harper averaged 15.2 points on 49% shooting, 2.8 assists and 2.0 rebounds per game. He was a gigantic boost off the bench in the win over the City Rocks, draining six three-pointers en route to 23 total points. We weren't sure how many minutes Harper would get at the outset of league play, but he is certainly earning himself a valuable role in the Stampede's rotation moving forward.

If you blink, you may miss him. The 5-foot-11 lightning rod may be the fastest point guard with the ball in his hands in the league. Blessed with incredble quickness and top-notch handles, Ramsey debuted in the EYBL by stuffing four different stat categories. Through four games, the Sierra Canyon point guard averaged 14.2 points, 3.7 assists, 3.5 rebounds and 2.7 assists. We are not sure there is a player in the EYBL who can effectively stay in front of him, as his first three opponents struggled mightily to keep up. California Supreme has a bright future with Ramsey at the helm, he will be a big cog in Supreme's system throughout the year.

If you are looking for a true point guard who plays smarter than his years, look no further than Murray. Standing at 6-foot-5 and weighing in at 185 pounds, Murray is one of the most physically-imposing guards on the circuit. The Athlete Institute guard was very steady through four games, averaging 12.2 points, 4.8 rebounds and 3.0 assists. Murray plays with poise similar to former Bounce guard Tyler Ennis, and has the size to be a matchup problem for most defenses. Through one EYBL session, it is easy to see why scouts are clamoring over his potential.

We've been high on Hardnett since the end of last EYBL season. Going into the high school, season he was bound for a big year, and he did just that, cleaning up at Gulfport and leading them to a Mississippi state 6A championship. Hardnett kept that momentum rolling in Sacramento, starting things off with an incredible performance against Playground Elite on Saturday, where he scored 30 points on 11 of 12 shooting and led Red Storm to their first win of the session. Hardnett finished the session with 17.8 points per game, leading Red Storm in that department. It wouldn't shock anyone if he ends the season in the very same place he started: On top.

We knew going into the session that Team Final had a strong, deep backcourt. That was mostly due to the fact that they have Malachi Richardson starring. But it was their point guard, Levan Alston Jr., who ended up leading Team Final to a 3-1 record in Sacramento. Alston led Team Final in scoring with 18.2 points per game. He also showed off a great burst and ability to push the tempo up the court. Alston will be a big piece in Team Final's season moving forward.

There were only four teams that escaped Sacramento unscathed and undefeated: Athletes First, BABC, E1T1 and Spiece Indy Heat. The only one that finished in the top three in terms of team scoring, rebounds and assists was Indy Heat. It was a little unexpected, considering Indy Heat's roster has a drastically different look to it from last year's star-studded lineup, but that didn't stop them from defeating Team Takeover, Wings Elite, St. Louis Eagles and NTL Red Storm on their way to a successful opening session. Sophomore Caleb Swanigan and junior Michigan State-commit Deyonta' Davis were extremely impressive in the middle, giving Spiece a huge advantage in every game. Jared Quarles has an extremely balanced and unselfish team, two ingredients that should lead to long-standing success.

As mentioned before, BABC went undefeated in Sacramento, and they did it in a total team fashion. Seven players averaged 4.5 points per game, with Jeremy Miller leading the way scoring 12.0 per game. Along with Miller, Terance Mann, Bruce Brown, Bob Martin and Tyree Robinson played all played 20+ minutes per game in the four wins. The boys from Boston were extremely scrappy defensively, limiting their first four opponents to an average 47.3 points per game, best in the EYBL. Their biggest win of the session came against Boston-rival Expressions Elite, a close tilt which they won by 3. A team like BABC is extremely dangeous, because a different player can beat you on any given day. Head Coach Leo Papile pleaded with us to not rank his squad in our upcoming power rankings, preferring to stay under the radar. Sorry Leo, not going to happen.

We have to admit, we had some pretty high hopes for King James. They donned a roster with a couple of five-star prospects in Luke Kennard and V.J. King. They had a scoring point guard in A.J. Harris, and a couple bigs that would at least pave the way for their scorers to find room in the paint. Instead King James collectively had trouble getting the ball to fall through the net, scoring just 57.5 points per game. Kennard, in particular, had a tough go in Sacramento, averaging just 10 points on 40 percent shooting after leading his own Franklin High School with 40 points per game this winter. We fully expect them to bounce back and be extremely competitive in Dallas and beyond, but this weekend left a lot to be desired.

The Refs of California Supreme/Oakland Soldiers:

One of the most competitive games of the first session was muddled by late-game controversy by the men in stripes. As Oakland tied the game at 64, Devearl Ramsey took the ball up court and passed it off to Aaron Holiday. He drove hard in the lane, drawing a good deal of contact as well as the official's feint whistle, who appeared to put his arm in the air signaling a foul. The initial call was overturned after a referee conference, igniting an uproar from the California Supreme fanbase. For some reason, the clock continued to run after the official blew his whistle, and the officials let the play stand as called. Oakland proceeded to rally past Supreme in overtime, leaving their bench with a bitter taste in their mouth. Oakland played extremely well and definitely earned the win, but we wish it could have concluded without a glitch.

Team Final vs. The Travelers

A game that got off to an extremely slow start offensively turned out to be the most entertaining game of the Sacramento session. The first game to tip off in the EYBL season ended in a 96-95 double overtime win for Team Final, fighting through first-half offensive struggles while finding a new go-to scorer in Levan Alston. The Philadelphia-based Team Final struggled with the quick, pesty Travelers guards, but found their rhythm en route to 49 second-half points. There were plenty of impressive offensive performances in the game from both teams, and it was a pleasure to watch two teams battle that hard so early in the season. In a game neither team deserved to lose, we saw a ton of heart from both squads.